On many farms, it isn’t uncommon for operators to diversify the family income with a side hustle, second career, or the additional financial support of a working spouse. It’s a natural part of spreading risk when it comes to making ends meet. What is particularly uncommon, though, is taking the reverse approach – entering that second career first with the goal of financing that dream of farming and making it a reality.

But that’s exactly what Joe Ulwelling did.

Joe didn’t jump into this project blindly; he was fully aware of the resources of time, money, and straight up hard work needed to make farming successful because he grew up working on the farm.

“I spent many hours as a kid chasing down cows, giving shots, raking and baling hay,” Joe said. “I have memories of riding in a tractor and steering a combine with my dad. So, it was always in the blood.”

Unfortunately for Joe, he didn’t have the opportunity to inherit or buy the farm from his father like many who grow up on a family operation. His grandfather sold most of the farm assets out of the family on the day that Joe was born – October 29, 1980. He didn’t want to leave the operation to Joe’s father because he felt that the farm economy would lead to a poorer life for future generations.

While Joe’s dad didn’t get the family farm, he continued farm work, and some of Joe’s earliest memories come from the late 1980s. Many, like driving the open cab John Deere model 105 combine with his father, are positive. Other memories of this period are more bittersweet.

“In 1988, a lot of farms around the country were getting bailed out by the government because the farm economy was so bad,” Joe said. “My dad was unfortunately not one of the recipients of the bailout, and I remember watching my dad’s farm auction. I remember seeing the ledger, and the one thing my dad really wanted to keep was his 4040 tractor. In the end, he had to sell that to pay the bank.”

Even though Joe’s dad continued to do some farm work until the late 1980s, those two events mostly ended things for the Ulwellings – until, that is, Joe and his brother, Matt, hatched a plan. Shortly after graduating high school, the brothers sat down together, had an earnest conversation about what it would take to get a farm operation of their own, and planned out a road map to achieve those goals.

“Honestly, the road map was to go to college, get a degree, get a good job, and then start acquiring what was available,” Joe said. 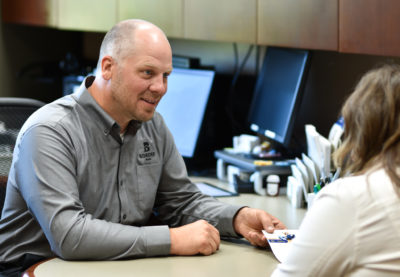 In 2005, Joe graduated from Gustavus Adolphus with a BA in Business Management and went into banking, joining Border Bank in 2007 and working his way up to the position of Chief Credit Officer, a role that oversees the vast majority of the lending for the all of the bank’s 10 locations across Minnesota and North Dakota. Joe’s brother, Matt, found work as a facility supervisor at Marvin.

“It was a long way down the road before we had the means to start,” Joe said. “Opportunities came, and Matt and I did it together. It didn’t make sense for both of us to start from scratch, so we just combined our resources out of necessity for both finances and physical labor.”

It wasn’t until 2010 that Joe was able to buy his first 40 acres, and together with Matt, worked to double their acres each year. Ten years after that first harvest, Joe and Matt now farm nearly 1400 acres of soybeans, spring wheat, and the occasional field of ryegrass near Warroad, Minnesota. And one of Joe’s most recent acquisitions brings his family’s story full circle.

After his grandfather sold off the farm in 1980, the farm went to another local grower, Richard. Joe recalls visiting Richard on his farm back in 1999 just as he was beginning college and he and his brother Matt were just starting the first baby steps of their master plan.

“I put a bug in his ear and asked if he were ever going to consider selling his farm that he keep me in mind for a chance to buy it,” Joe said. “And 20 years later, he gives me a call and says, ‘Come on over. I think I’m going to sell it, and I said I’d give you the first opportunity.’ That first visit was the only time I had talked with him in 20 years. He remembered that and kept to his word.” 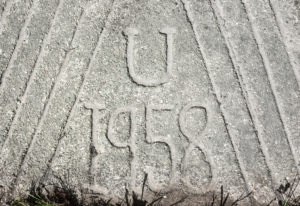 ‘U 1958’ stands for Ulwelling 1958. These words were etched into the concrete of his grandfather’s farm and remain today. Joe was able to reacquire the home place after it had been out of his family for nearly 40 years.

That call seemingly out of the blue led to Joe closing the purchase of his grandfather’s former farm in late September 2019, returning the home place his grandfather sold the day he was born nearly 40 years ago. The cement pad on the property still has “U 1958” etched into its surface by his grandfather, signifying ‘Ulwelling, 1958.’

These days, Joe still works full time at the bank, but managing a 1400-acre farm operation while working full time is not without its challenges. The amount of time it takes to do two jobs while raising a family creates strain on work-life balance.

“Some people use PTO to go on a cruise or a vacation,” Joe said. “I spend my PTO to drive a tractor or combine. I get up early in the morning to load a semi. And some tasks, we simply don’t do because we don’t have the time or expertise, so we hire it out. We don’t own a semi or a trailer, so a local trucker comes to help us haul all our grain. We don’t own our own sprayer, so all spraying is done by the local co-op. I do sacrifice a little bit of family time. It’s not always easy, but it’s seasonal work, and I try to make up for it a bit in the non-farming season.”

Even though running the farm adds stress to his life, the lifestyle brings Joe happiness and fulfillment, as the venture he and his brother have undertaken has allowed him to help his father return to the operation he enjoyed decades ago while helping to build something tangible to pass down.

“Dad sits behind the wheel of the tractor more now than my brother and I combined,” Joe said. “He really gets the chance to enjoy farming again without the stress of the financial aspect of it. And I have a strong desire to have a farm that will be available to my kids. I enjoy my work at the bank, and I don’t want to give that up until I reach retirement age. I hope that by then, we will have a self-sustaining operation for me and my family so I can fulfill my really strong desire to farm and have something to hand down to my kids.”

Working at the bank while farming also gives him a unique perspective into both the world of finance and agriculture. It’s really difficult to have a farming operation that can carry all the expenses of family living, and the cost of living is steadily increasing. If you can scale up the size of the operation – some of the customers Joe works with at the bank farm in excess of 4,000 acres and up to 20,000 acres – it’s more possible, but always difficult.

“We have a lot of successful operations up here, but if you’re a family operation under 2,000 acres with today’s prices, it’s really a struggle without diversification and off-farm income,” Joe said.

Despite this, Joe is able to use his knowledge of both arenas to the benefit of the growers he works with. 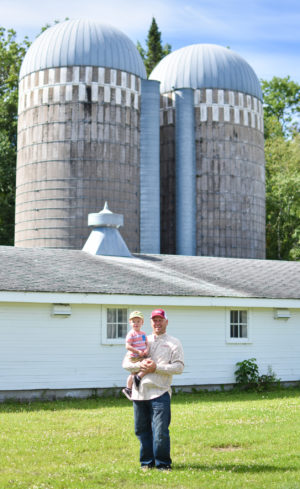 Joe Ulwelling stands holding his son, Isaac, in front of the silos that his grandfather built.

“I appreciate the challenges that farmers have to go through,” Joe said. “Since I started working at the bank in 2007, I don’t know if we’ve had more than one or two defaulted ag loans. If a farmer were to come in and ask what to do to shore up a shortfall or help with family living, I would recommend they look into alternative crops or niche crops, find additional non-farm income, and diversify however they can. They’ll do whatever it takes to make ends meet. It’s just the resiliency of the farmer mentality of, ‘I’ll do whatever it takes to make it work.’”

To find success on the farming side, Joe and Matt didn’t have the benefit of a lot of guidance from their dad or grandparents. By the time they had relaunched the family farm, their grandparents had passed, and their father hadn’t actively farmed much since the 1980s. To make up for this knowledge gap, Joe makes sure to tune in to Ag PhD as often as he can, absorbing the information on Ag PhD TV and radio, sometimes using repeated viewings to make sure the information sticks.

“I DVR every episode of Ag PhD and I listen to the Ag PhD Radio podcast all the time,” Joe said. “If I’m in the tractor for hours, I listen to it. If I travel for work, I will get three or four episodes in. Sometimes, I’ll listen to the same episode again right after finishing it to retain it better.”

An additional resource for Joe is his Hefty Seed Company Agronomist, Aaron Yaggie, whom he has looked to for agronomic advice for years.

“Aaron has always been sharing information that would help and benefit me,” Joe said. “Anytime there was information available, he would send it on to me and I would just gobble that up. I have an interest in being a good farmer and producer, and I didn’t really know anything about soils and fertility. Now I can talk about organic matter, cation exchange capacity, and where on my farm I need lime to fix my pH. I would not have any of that knowledge if it weren’t for the information I get from Hefty’s.”

With any farm operation, the key to continued success is learning more, and Joe is more than willing to put in the work needed for improvement.
“There’s a lot of things I want to try,” Joe said. “I want to soil sample in small grids. I want to tissue sample every week to see how my plants are doing, things like that.”

As Joe and his brother continue to build their operation and expand their agricultural knowledge, the resources of Ag PhD and Hefty Seed will be there to help.

“If we don’t know how to do it, we better go learn and listen to someone who knows what they’re talking about,” Joe said. “That’s been a big benefit for us in the end.”