Skip to content
Previous Next
Enlist Soybean Lessons from 2020

Enlist E3 soybeans took a huge jump forward in market share in the United States in 2020.  They’ve been on plenty of acres in enough situations to start making some determinations for best practices.

Here’s a short list of Enlist lessons we learned from 2020.

Enlist soybeans allow you to use Roundup, Liberty, and Enlist One for weed control. A common question is whether or not you can use them all at once. No, all three of those products in the tank is not a good mix, nor is it cost-effective. However, mixing Enlist One with Roundup or Liberty is very popular. Liberty plus Enlist One hasn’t created issues. Enlist One with any glyphosate, on the other hand, can cause problems if incorrectly mixed. While most of the issues have come with 6#, K-salt glyphosates (like Roundup PowerMAX), we have seen issues with other glyphosate formulations, too, so please follow these mixing instructions anytime you put Enlist One together with any glyphosate:

Liberty plus Enlist One earned the nickname of “Liquid Lava” on our farm due to the way it melted down the weeds. We’ve found the trick to this mix is to let Liberty lead the tankmix. In other words, a full rate of Liberty (at least 32 ounces per acre) is the top priority. Enlist One could also be at a full rate, but some farms have had decent luck with lower rates as long as the Liberty was still full strength. By the way, many farmers say they want to stick with dicamba because it’s slightly better on kochia than 2,4-D, but a Liberty/Enlist One combination is easily better than dicamba alone on kochia and almost all other weeds.

Drift from volatility has been a non-issue with Enlist One. Follow the labeled guidelines and Enlist One works great and stays put. On millions of acres of use over the last few years, we know of zero volatility problems with Enlist One, so it is obviously completely different than any of the old 2,4-D’s like LV-6 and amine. On the other hand, physical drift is always a concern with everything you spray. While we haven’t seen any big problems with Enlist One, we always encourage you to use the right spray nozzles, wind guidelines, boom height, etc., and be careful around sensitive crops.

Roundup and Enlist One can both be sprayed up to R2 (full flower in soybeans). Liberty can be sprayed up to R1 (first bloom). Due to those facts, we are seeing more farm operations utilize Liberty with or without Enlist One in their first pass through the field. On the later pass, the Roundup plus Enlist One tankmix gives more timing flexibility to kill that last flush of weeds.

Having a trait with tolerance to three major herbicide chemistries is great, but it’s no reason to not continue to utilize the 3 Pre strategy, as well. Higher yields, better weed control, peace of mind, and spray timing flexibility are a short list of the benefits of using a yellow (trifluralin or Prowl), metribuzin, and a PPO (Valor or Authority). Plus, by using a pre, it’s possible you may be able to cut out one of your post-emerge applications. 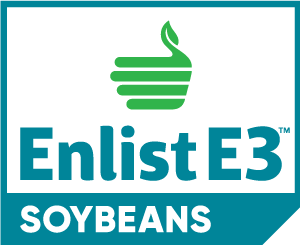