Skip to content
Previous Next
How Much Nitrogen does your Crop Really Need? 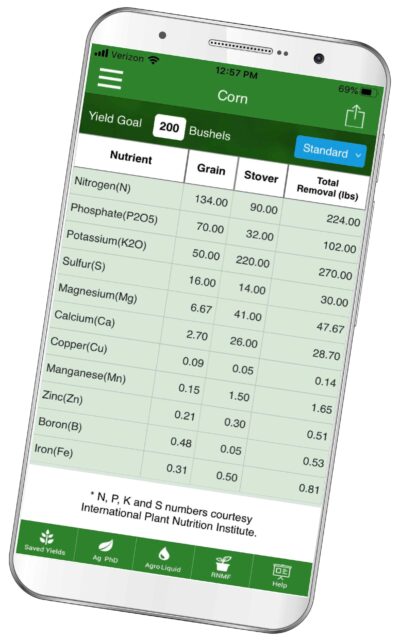 The simple way a lot of agronomists make a recommendation for nitrogen in corn is to take the yield goal minus a “soybean credit”.

For example, if you are shooting for 200-bushel corn, they will say 200 minus a 40-pound soybean credit means you need 160 pounds of nitrogen. Unfortunately, that’s wrong. In many cases, you may be overapplying nitrogen, and in a few instances you may be short.

Here’s what you need to know so you can make your own nitrogen recommendations from now on.

1. Determine how much nitrogen you actually need in total for your yield goal. Look at the Ag PhD Fertilizer Removal app on your smartphone or tablet. Let’s use 200-bushel corn as an example, and you can see this in the screenshot to the right. 200-bushel corn, in total, needs 224 pounds of nitrogen.

2. The amount of nitrogen carried in from the previous crop. There is no such thing as a “soybean credit”. Someone made that up a long time ago to avoid figuring out what was actually in the soil. In some cases after soybeans, we’ve found more than 100 pounds left in the soil. After the record rains we had in 2018 and 2019, it was common to find just 10 pounds out there. The first soybean field we soil sampled this fall had an average of 18 pounds of nitrogen, so let’s use 18 in our example.

3. Organic matter mineralization. For each 1% of organic matter in your soil, you will get roughly 20 to 30 pounds of nitrogen in the Midwestern U.S. over the course of the growing season between spring thaw and freeze-up in the fall. The warmer your temps, the more N is typically released. I usually figure on the low side at 20 pounds. A lot of our soil organic matter levels are 4%, so that’s 80 pounds.

4. How much nitrogen will you lose? This depends on rainfall, cation exchange capacity (how heavy your soil is), and the timing of when you apply your nitrogen. To minimize loss, spoon-feed your N throughout the growing season.

5. How much nitrogen will be tied up by high carbon residue? For example, in continuous corn we usually suggest adding an extra 50 pounds to account for this tie-up.

So in our example, if you need 224 pounds total, then subtract 18 pounds already in the soil, minus the 80 pounds from organic matter, that leaves 126 pounds of nitrogen you must apply at a minimum for a 200-bushel yield goal. However, if you are expecting some loss and you have high carbon residue, you need to bump your application rate accordingly.

As much as I love to keep things simple, I have to also mention this – your yield level varies throughout each field. Please consider varying your nitrogen application rate, as well. No one knows how much rainfall you’ll get or what your final yield number will actually be, so nitrogen application rates will always be an educated guess. I just prefer to use good information from soil tests when establishing the baseline for fertility rates. One last thing I should mention, too, is if you are using fall nitrogen, try to plant your crop early in the spring so you use the N before it is lost.
Good luck!

How much potassium does it take to reach your yield goals? Find out using our Fertilizer Removal App! 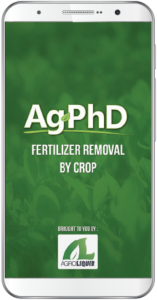